My sister and Keven just left for a cabin in the mountains, they will be gone a week. The point of the trip is for Kev to detox in a safe environment away from home but not in a detox house. The last time I paid for him to go to a detox he had a roommate who made sexual advances toward him, burned him with a lighter, and other inappropriate behavior. I should have sued them to get my money back.

He went to his dr. yesterday and got all the withdrawl meds. Now I just have to hope that my sister can keep she shit together and take care of him. We all agreed that it would be better for her to go than me because of the family dynamics we all share. She is not as nurturing, which in this case is good because he basically just wants to suffer alone. And suffer he will.

For those of you lucky enough to never watch someone you love go through an opiate detox, here are the symptoms:

Early symptoms of withdrawal include:

Late symptoms of withdrawal include:

Its so hard to watch him suffer. Thankfully the cabin has a washer/dryer so they can wash the sheets as needed, he will drench them with sweat.
Once he gets back he is going straight to his dr. for a Suboxone Shot (an injection that blocks opiates for 30 days). We have the appt. set up, he's not even coming home first.

This is truly the most hope I have EVER had because the whole thing was his idea. He HATES having to use heroin to survive. He was on the brink of suicide the other night but couldn't do it because of my sis and me. He has a huge emotional breakdown and the next day came up with this plan.

Once he gets home a lot of things will have to change, he will need to get active and leave the house (a rare occurrence when he's using), he will need to find things to do that interest him. And HOPEFULLY make a friend or two. Maybe even meet a nice girl eventually? I've given up my dream of being a grandparent because he doesn't think he should be a dad...but who knows.

In other news, my sister's disease has a new twist which is scary as hell. I'll spare you all the details but the gist of it is she goes bat shit crazy. I'm not kidding, She had to be hospitalized three times for it and it can kill you if you don't get treated immediately, Its because of the cirrhosis she has. Its called Hepatic Encephalopathy.   She HAS to take her medication or it can come back with one missed dose.

As for me - I am so happy to be alone for a week.  No one constantly asking me questions, asking me to do things for them, no one to clean up after or cook for.  No one being bitchy or depressed or whiny or annoying in any way,  Just me, Ivy, Sugar, Atticus and Tortie.  Ivy will miss Therese a lot, but I will take good care of her.  She's already sad that her mama is gone: 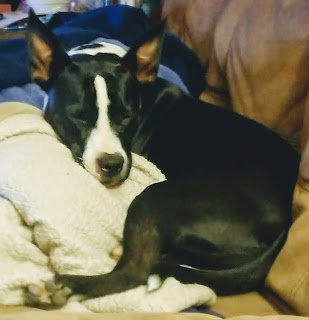 I'm still with Peter, its been almost 3 years with one break-up a year ago.
I hope my faithful readers out there are doing well.  I'd love to hear what's new with you so please leave a comment!  Thanks.

Please, no more ANONYMOUS comments. If you have something to say, please feel free to say it and own it.