Its a Fine Line

So, I've been told again and again that I need to back off from Keven and let him fail if that's what happens next.  Of course this goes against every grain in my body.

The best decision I made regarding Anthony was to just accept him for what he was:  an addict that did heroin, meth and lots of DMT toward the end of his life.  (I put a definition of it at the bottom of this page for those who don't know what it is.

He told me the DMT was life changing for him and it did seem to make him better able to cope.  He begged me to take it with him (he knows I have a history of LSD use, which BTW, I loved until my first bad "trip").  I refused of course but was curious.

The last four months with Anthony were the best, and his grandparents deeply regret getting a restraining order against him.  There is a site I've belonged to for years (its local to where I live) called SOLACE, I've mentioned it before.  Most of the parents/loved ones who belong have lost someone to drugs, some still struggle with it.  Some of  the ones that have lost their child wish they could go back and do things differently, even if it wouldn't have saved their child at least they would have had more time with them instead of turning them away.  I love my boys so much and am so glad I know Anthony is at peace.  The one year anniversary is in a few weeks. 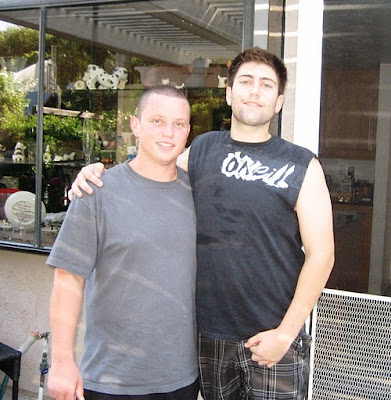 A more innocent time - they were getting high but still had that sweetness. 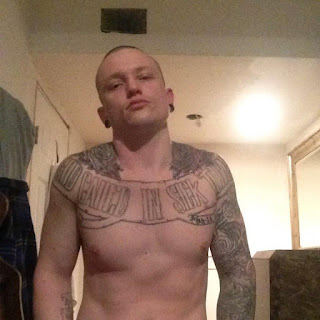 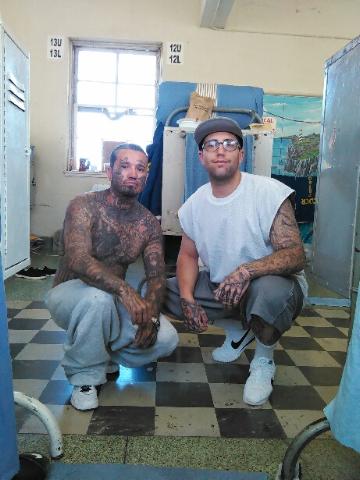 In prison with they guy that gave him the hideous hand tattoos.

When Keven gets out I am going to try to find that fine line to balance on between enabling and supporting.  My definition of that looks like this:  Only doing things for him that he can't do for himself, which includes teaching him how to do things that he's never done before and needs help with (not doing it for him).  Supporting means loving, caring, encouraging - which comes naturally to me.


DMT occurs naturally in the human body, and taking it could simulate death.
The drug DMT (diemethyltryptamine), which causes hallucinogenic experiences, is made up of a chemical compound that already occurs within the human body endogenously (as well as in a number of plants). This means our brains are naturally set up to process the drug because it has receptors that exist specifically to do so. Cannabis is another illegal drug that occursendogenously.
Some research based on near-death experiences points to the fact that the brain releases DMT during death. Some researchers have also conjectured that DMT is released during other intense experiences, including orgasm.

Yesterday was my reading with the Medium, who I absolutely loved by the way, and it was Life Changing.  Not only did I hear from Anthony but also from both my parents!  And she also was able to pick up Keven's energy and tell me things about him that were right on, as well as Anthony's brother Timmy.

The ONLY thing she knew about me was my first name.  She never asked me a single question other than "what to you want to know from this young man" (she knew his name after she "met him" but I never once said it.

First she started off by telling me about what she was picking up from my energy - that I am extremely intuitive and know I have a gift but I doubt myself too much to use it (true, I used to tell people about things I "just knew" and they never believed me so I stopped).

Then she told me that my mother (she knew her name, saw her surrounded by all the dogs she's every owned - a huge pack of them, saw her garden and felt like she was digging in dirt and planting).  My mother said some things to me that ONLY she would know.  Something my sister said at my mother's death bed that really hurt me...my mom mentioned it and explained it to me!!!!  She knew how both my parents died, when they died, and could see that my mom never remarried.  She said my dad was waiting for her as soon as she passed over and was there with all her dogs to greet her.  My dad said he would NEVER allow this sort of thing to go on under his roof (seeking out a medium) but he was glad I did it because he was so thrilled to see me and communicate with me, his oldest.

She also knew I had one brother and one sister, she told me both my mom and Anthony said to say hi to Keven.  AND she was writing things down and spelled his name KEVIN like normal people do but my mom corrected her and said it was KEVEN then my mom corrected her again when she spelled my dad's name JERRY because he spelled it GERRY.  I have the piece of paper, she gave it to me.

Oh - and get this - my mom brought up the DUCKS!  The Anaheim Ducks that she/we loved to watch together!!!!

Then we got to Anthony.  He came out in one of his really good moods and was actually flirting with Kimberlee!  She said he loves the ladies doesn't he?  He told me it was an ACCIDENT and not to listen to the gossip, it was not homicide or suicide "Do you really think I could fucking do that to you?"  were his words.  She said he was calling me mom and that he had not yet connected with him own mom in the afterlife.  She explained that when we die, we go through various layers and that he's still in the very beginning layer which is sort of like going to a recovery house down here.  She knew about the drugs and said that bad things happened in Santa Ana with him and Keven (yes, a story I can't tell but it was horrible).

Then she said "He's using very strong language and wants me to use it with you but I told him using it once was enough and he said he and Keven always talk like that in front of me and that I didn't mind"  True.

This is just the tip of the iceberg of what happened.  I have the whole thing recorded and have listened to it at least 4-5 times so far.  I will share more later.  The stuff about Keven and Timmy was the hardest to hear - apparently once we die we are happy, its being down here that is so damn hard.

Go ahead, call me crazy, I didn't want to believe it myself and thought of all these ways she could have infiltrated my FB to find stuff out - but she never knew my last name and even if she did, there was SO MUCH that she said about my parents, my family, etc. that no one else could know but them!

Anthony's main message to me was that he wanted me to laugh more and cry less.  I'm playing it for his Grandma tomorrow, his grandpa doesn't want to hear it (I understand that).  I'm just worried that she is going to be hurt and upset by a few things that were said about her daughter (Ant's mom who died 11 years ago) and about Timmy.