So far, things here are back to "normal".

I had a good talk with him last night.  His main issue is that he's depressed and I can see where he's coming from since he's pretty much alone all day at work and has very few friends to hang out with after work or on weekends.  There were some other issues to.

He said he did NOT use any drugs the other night other than weed, he just didn't want to be alone so he hung out with someone he knew would be "fun".

I don't want to be naive, but I don't want to worry for nothing.  I am going to do my best to live in the moment and not project the future.  One day at a time, right?

Most of the people in my day to day life are depressed  right now, I've gotten good at not taking on their issues, but its hard to be cheerful around them.  Trying to figure that one out.

Hoping we all have a truly peaceful week with no national or personal tragedies.

Back in the saddle again...

Keven didn't relapse on heroin, but he did do something, just not sure what.  I came home from my friend's house at about 11 and he was in his room with a "girl" (she's about 30 years old) that he used to get high with.  The room wreaked of weed (which honestly doesn't bother me all that much, I know lots of people that smoke it responsibly).  I told him I didn't want her there - she was super high, trying to hug me and asking me if I wanted to smoke with them, I said no and she said "oh well what do you want to do,?" (meaning what kind of drugs did I want to do).  Keven told her I didn't do drugs.  I noticed the inside of a pen and the cap lying on the dresser and asked about it, he said he was writing something - right, without the pen in the case I kicked them out.

This morning he comes home all nonchalant like nothing happened.  I gave him a 30 second talk reminding him if he starts using he's out.  He was not defensive, just a bit snotty.

I don't want to get back into that life, I refuse.  I feel sick just thinking about it.

I'm thankful that while going through this drama last night two dear POAs were on Facebook and talked to me.  I'm so glad I still have you guys in my life even though I don't write here as often.

I was just reading the blog, My Life as 3D and he'd shared a pic of some of the things he'd collected from his son's using days.  It reminded me of this photo I took after searching Keven's room one time.  It sort of makes my stomach turn to even look at this.

I had a scare last weekend.  I was vacuuming his room (something he does himself, but I wanted it to be vacuumed really good, like mom's do it, so I did it).  Behind his door there was a piece of carpet sticking up just a little bit, my heart skipped a beat and I thought..."No, it couldn't be".  But it was.  It was three syringes and spoons wrapped up in plastic.  I came to the conclusion that it was old.  There have been no signs of him using, plus he's on Suboxone.

Things seem to be going well for both Kev, and me.  I hope everything is going well with each of you.  Trying to catch up on blog reading. 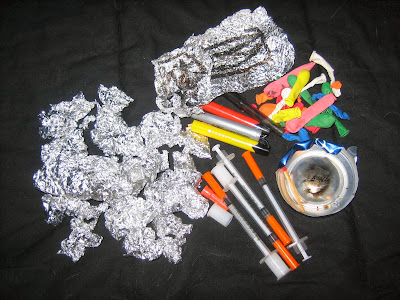 I don't have much to say today.  I am very content at the moment.  I am in the reclining chair with my laptop watching Dallas Raines talk about the weather while Sugar sits on the end of the chair.  Simple pleasures - life is good.

2nd Week on the Job for Kev

For those of you who aren't connected with me on Facebook, I have exciting news:  Keven got his very first job and today he started week two.  Its just what he needed to feel good about himself (not to mention earn money!).  He's working for a place that brokers/sells/etc. these huge RV buses (you can check it out here, I find them amazing and could easily live in one! http://www.californiacoachcompany.com) He does the interior detailing and also the wheels of these huge things.  Its been a huge adjustment from watching TV and riding his bike :)

He'd been looking for work for a long time and could not even get an interview....UNTIL I REACHED OUT TO THIS WOMAN FOR HELP:  Linda Lou in Vegas, a long time blog friend, wrote his resume for him and coached him on interviewing, etc.  She wrote about it today:  http://vegaslindalou.blogspot.com

So that's what's new with me.  I'm a happy camper right now.  My son has his first job at age 22.  Drug addiction will set you back for years so you start many things late in life.  But at least he's started now!

Update on Anthony:  I don't know if I mentioned this but he moved up to San Francisco and is not using.  He's called a few times and I can hear in his voice that he's telling the truth.  Funny how easy it gets to recognize the difference in just a glance at the eyes or the sound of a voice.  One day at a time.